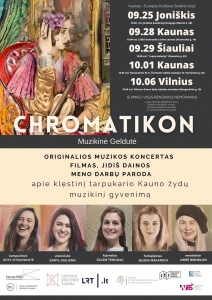 CHROMATIKON On the road to Kaunas European Capital of Culture

“Chromatikon” is an all female UK based music and art collective. It was formed in 2020 during the global pandemic. The members are Lithuanian composer RūtaVitkauskaitė (Royal Philharmonic Society), UK artist Aimee Birnbaum RI (Royal Institute of Painters in Watercolour) and award-winning Trio Sonorité musicians: Turkish clarinettist Özlem Tercanli, Canadian cellist Daryl Giuliano and Lithuanian pianist Jelena Makarova. Like Rūta, all three players are graduates of the Royal Academy of Music, London.

Their aim is to bring a message of hope and unity to audiences, by exploring a range of topics they deeply care about: including mental health issues, isolation, climate change and the survival of and discrimination against minorities.

Their next project is a two week concert tour of Lithuania in late September and Early October 2022 as part of the Kaunas 2022 European Capital of Culture. Chromatikon will perform in Kaunas, Vilnius, Šiauliai and Joniškis.The program will be in two halves. The first is a performance of an extended version of the “Music Shell” and the second a group of Yiddish songs, in which Jelena, Daryl and Ozlem will accompany Aimee’s husband, Michael. During the intermission concert goers will be able to enjoy a small exhibition of Aimee’s artworks evoking the pre-war cafe culture at such places as Metropolis, Versalis, Locarno, and Konradas. Admission to both concerts and  exhibitions will be free.

The schedule of performances is: