Ian Cook RI has a one-man exhibition at the Lillie Gallery, Station Road, Milngavie near Glasgow which continues until 6 February 2020. Please visit the gallery website for further details: https://www.edlc.co.uk/heritage-arts/exhibitions/lillie-art-gallery-exhibitions 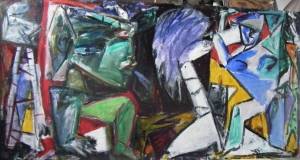 The exhibition comprises several large works and around 40 others of varying sizes. The research for this collection of paintings was gathered in indigenous communities in Africa and the Americas.  The title ‘Savages’ refers not to the natives of these lands, but to our dubious colonial legacy in  these territories. Literary transcripts in documentary form accompany the artworks, which contrast today’s landscape with it’s often violent history.

In Paraguay Ian observed that the stark beauty of the landscape between Asuncion and the Alto Parana in Paraguay has a placatory effect on the soul, lulling one into an ultimate sensation of inner peace…

and it isn’t until one reaches the urban heartlands of the region that this illusion becomes fragmented, dispelling memories of silent fields and calm waters. In keeping with all Latin American countries, Paraguay has witnessed vicious power struggles resulting in cataclysmic loss of life. 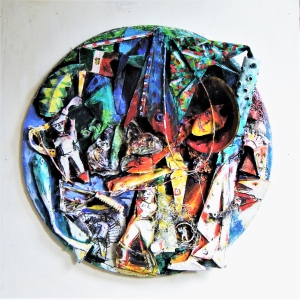 Whenever possible, Ian tried to visit the former centre’s of imprisonment to speak to survivors who have become caretakers of these dark buildings, preserving their history in an attempt to prevent repetition.

The images that remain memorable are those of the countless photos of the victims that line the prison walls. In a room adjacent to the former prison, students can congregate for daily lectures that explain the legacy of the building.

The deeper incursion one makes in these lands, the more aware one becomes of that spectral presence that haunts the land, scythe in hand, awaiting the next coup and the tide of blood that follows in its wake.

On visiting the west coast of America Ian became enveloped by the history of the catastrophic decline of the Native American population, tracking it’s course. The initial trading of glass beads and blankets by Captain Cook’s crew in exchange for sea otter pelts heralded an influx of hunters, traders and entrepreneurs  desperate to take advantage of this new source of profit.

A virulent combination of government pressure, military force and settler-borne diseases like smallpox spelled the end for the indigenous peoples whose ethics once ensured conservation of environment and resources, the final nail to their survival being delivered by the armies of buffalo hunters who slaughtered the herds, denying the Indians their vital source of livelihood.

We cannot reverse history, but it is valid to remember that, prior to the great incursions made by settlers, the ways of the Native Americans had more in keeping with saving the environment: a lesson that we today would be wise to adopt.