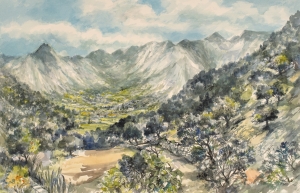 Charles Bone PPRI was President of the Royal Institute of Painters in Water Colours from 1979-1989. He writes:

The current exhibition of the RI includes a watercolour of a landscape near Deya on the island of Majorca. Charles Bone is a frequent visitor to the island and has had several exhibitions there and completed a large mural in a private house in Santa Ponsa. The late John Noakes, who lived there was one of his close friends and having spent much of his time on dangerous projects for Blue Peter took up painting later in his life to relax. The beautiful island of Majorca has a permanent art gallery and studio by Miro.