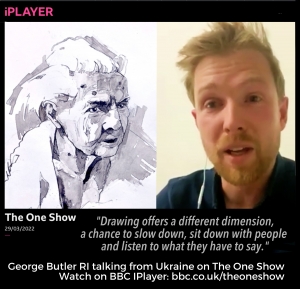 Two weeks into the Russian invasion, as millions of Ukrainians fled their homes and headed west, George Butler RI began his own journey in the opposite direction. Travelling light, his dip pens, watercolours, Indian ink and drawing board stashed in his customary shoulder bag, he took a flight from London to Lasi in Romania, then jumped on a bus to Chisinau, the Moldovan capital. Another long and crowded bus journey took him to Odesa in southern Ukraine, where he stayed for a few days before continuing on an overnight train to Kyiv, at the heart of the conflict.