Getting to grips with Instagram by Lillias August RI 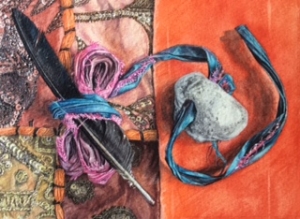 I am fairly new to Instagram and once lock down happened I was determined to become better acquainted with it.  I can’t say that I am yet, and I know that I have made mistakes. So I started off by posting one painting a day from a series of paintings that I had done for an exhibition 10 years ago called the ‘A-Z of still life’.  It was fun revisiting the work and it felt like an anniversary (I had given some of the proceeds to the Artists’ General Benevolent Institution as I was the RI’s AGBI steward that year). After the A-Z series, it was suggested that I did numbers 1-10 which suited me because I do still life paintings of objects in rows so each day I did a number – for instance, on the day allocated to ‘7’ I would post all the still life paintings that included a row of 7 objects.

It was at this point that I noticed the start of the #artistsupportpledge initiative, whereby artists could post their work on Instagram at a price under £200 and, once they had reached £1000 of sales, they would pledge to buy the work of another artist.  This is a thoughtful and expanding initiative, built on trust and generosity during a time when artists are being badly effected through the shutting of exhibitions and galleries.  I started by selling prints from the A-Z series and I was soon able to buy my first work. As luck would have it, I went on to Instagram at the same time as Claire Sparkes, a new member of the RI, had put a painting up for sale and I was delighted to be able to snap it up.  I have always admired her work and this is a little gem. Prints are Ok and it is nice to offer images in a way that some people can afford if they can’t get an original but it started me thinking about doing very small paintings that could fit into the  ‘under £200 category’.  Since then I have been painting little pictures of objects and had quite a few commissions. I have been able to support more artists by buying their work.  It’s been fun and interesting but I know that I still have not mastered the art of Instagram or the magical ways that other people seem to use it – it is not second nature….. I will also soon decide to take a break from painting little pictures and go back to quite a few large ones that are calling to me from my ‘waiting’ list!