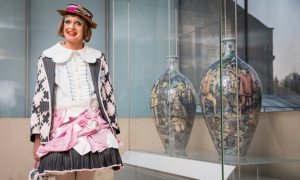 Grayson Perry launches an Art Club on Channel 4 this evening at 8pm to ‘battle the boredom’ of lock down and encourage Britons to get creative while at home.

Antony Gormley, Tacita Dean and Vic Reeves are among the guests that Grayson Perry is inviting, via video call, into his workshop as he encourages the UK to think creatively while in isolation on a new Channel 4 show.

Grayson’s Art Club launches on Monday with Perry promising to help “battle the boredom” and take viewers “on a journey of art discovery” with a six-part series of themed shows where the British public is encouraged to create their own work.

The first episode’s theme is “portrait” and will feature the American-born English artist Chantal Joffe who is known for her large-scale figurative paintings and the comedian Joe Lycett, who recently changed his name to Hugo Boss, and has taken up portraiture during the lockdown.

The second episode will be animal themed, with Maggi Hambling, the British painter and sculptor, and Harry Hill joining Perry to explain their animal artwork, artistic practice and how they have been creating work during the lockdown.

Guests for the third episode will be the actor and comedian Jessica Hynes and the British sculptor Antony Gormley, while the fourth episode will feature the artist Tacita Dean and comedian Vic Reeves. Other guests are to be confirmed.

The series will conclude with artworks made in isolation by members of the public and Perry’s guests, which will form the basis of an exhibition that will “chronicle Britain’s mood and creativeness in isolation”.