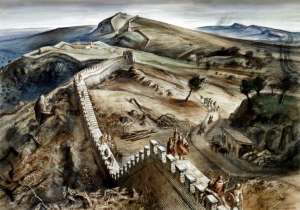 Julia Sorrell and her brother Mark have written a biography of Alan Sorrell, their artist father. Here Julia describes her thoughts on the writing her section of the book:

‘Back in 2015 I settled down to write my section of a new biography on my father Alan Sorrell, whilst my brother Mark would write his section, paying particular attention to our father’s contribution to archaeology. He went into detail about my father’s method of approach and his working relationship with leading archaeologists of the day, whilst I concentrated on his life both artistically and emotionally. The book was commissioned by Oxbow books and funded by Marc Fitch Fund and Historic Environment Scotland.

When writing this biography it was fascinating to discover that looking back over my father’s personal and artistic life, however painful or difficult at the time, it nevertheless prepared him for his future would-be involvement in the archaeological world. He worked tirelessly alongside the most important archaeologists of the day to help visualise for the layman and enthusiasts alike how our heritage like Stonehenge, Hadrian’s Wall etc. appeared in their heyday. Unwittingly he also played a key role in creating tourist attractions familiar to us all today. In ‘Apollo,’ Gavin Stamp wrote in January 2014: ‘..no artist has done more visually to educate the (British) public about past civilisations than Alan Sorrell.’ It would be wrong however to say “Oh yes – Alan Sorrell, the archaeological illustrator.” In fact it would be a complete understatement of this man who interestingly has more work in public collections than any other 20th Century artist; who was elected into the RWS in the 1930s; regularly exhibited at the RA Summer exhibitions and undertook portrait and mural commissions as well as being a War Artist. Gavin Stamp continues to write that in the Sir. John Soane exhibition Alan ‘ emerges here as a neo-Romantic artist of great charm and skill, a worthy contemporary of Eric Ravillious and Edward Bawden.’ 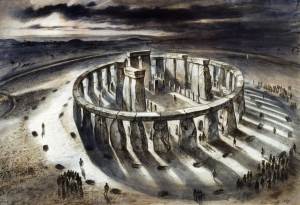 STONEHENGE, Wiltshire. Reconstruction drawing of Stonehenge as it might have appeared in 1000 BC by Alan Sorrell.

For those wishing to know more about the contents broached in the biography, I have included a link to my blog and if I have whetted your appetites still further I am delighted to say that the book will be on sale in the Mall Galleries shop and if you do buy it, I hope above all you will relish the diversity and quality of this fascinating man’s work, of which there are many examples illustrated. Of course I am biased, but nevertheless I believe he deserves a place in the art history books. For me, the writing of it was my small way of saying ‘thank you’ to my father. If you wish to ask me in person, or email me at julia@juliasorrell.com any questions, I should be delighted to answer them.