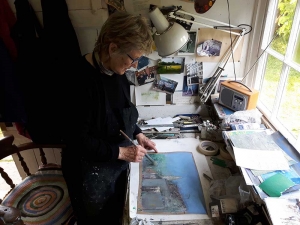 My work is mainly concerned with the exploration of the landscape, particularly of estuaries and industrial sites, and more recently of the Burgundian landscape.

I am interested in the layering of experiences seen and felt.

Mood, atmosphere, weather and a sense of place all affect the way in which I approach a painting.

I have a different sketchbook for different subject matters. Mostly I create washes over the paper so that I am not faced with a white sheet and it gives me something to work against.

Drawing is done to note the weather, texture and mood and I take photographs as an aid to construction. Back in the studio, I like to create a surface of washes, marks and textures before I begin to construct a painting using hog hair brushes, palette knives and sandpaper.