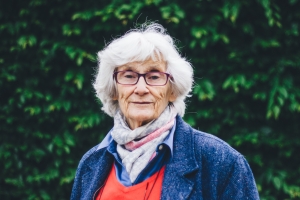 I was born just before the Second World War. My early years were
spent playing in bomb-sites and sleeping in the air-raid shelter in the
garden. Even then I was always drawing and painting. I went to
Kingston Art School as a Junior Student. When my family moved to
Chandler’s Ford, Hampshire, I began studying at Winchester School of
Art. I remained there for four years, following courses in painting,
modelling and sculpture, illustration, architectural drawing,
life-drawing and portraiture.

In 1954, being awarded a County Major scholarship, I was admitted to
The Slade School of Fine Art, University College, London. Sir William
Coldstream was Slade Professor at that time, and I had the good fortune
to study under Claude Rogers, William Townsend, Lucien Freud and Henry
Moore. L.S.Lowry was a visiting tutor. At that time the Course was
very academic, and included Art History (under Ernst Gombrich) and
Life-drawing/Anatomy. I was awarded two Slade Prizes – one for
portraiture and the other for Composition.

In 1957 I graduated with a Diploma in Fine Art.

I became interested in Art Therapy, and worked in a large psychiatric
hospital for a few years.

I married in 1959 and soon lived in Malta for three years. Later we
went to live in Uganda, where I lived and taught in a teachers’
training college. I also taught in two “grammar schools”, preparing
pupils for Cambridge “O” and “A” level Art, which included pottery and
fabric-printing. Before long, President Amin expelled the Asian
shop-keepers from whom I had been obtaining my oil paint, so I became a
watercolour painter, joining the R.I, in 1980.

By this time we had moved to Mol, in the Kempenland, in Belgium. I
was a founder-member of the Kempenland Watercolour-painters, which has
subsequently become a national affair. There I painted much more,
having my own annual exhibitions. I developed a technique of using
the brush like a pencil, making overlapping lines – hachures –
which added subtlety and depth to my landscapes.

My husband and I have travelled extensively in Europe and other
continents; I always return with sketches and working-drawings. The
deserts and the National Parks of the American Mid-West have been an
inspiration from which developed my interest in abstract painting.
For these paintings I like to use the Daniel Smith (Seattle) range of
colours – they seem to be stronger, deeper, than any other make.

I exhibit at the annual R.I. exhibition at the Mall Galleries, and have
exhibited at sundry exhibitions in Europe.