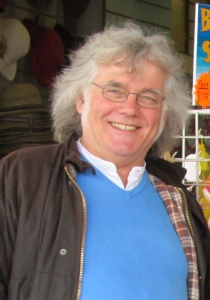 Living and working in the West Country, Colin’s subject matter is often based on the life, activity and scenery he finds around him  on a daily basis.
Maybe it is the calves caught in the sun as they stand in a barn or at the livestock market, waiting in the pens on their way to the selling ring. It could be fishermen on the river below the house or the hunt chasing across Exmoor with it ’s changing colours and light. Perhaps a day spent on the coast with tourists enjoying the beach or sailing boats with their colourful sails out in the estuary. All these activities are part of life here in Devon and often appear in Colin’s paintings
Some are painted directly on the spot while others are made from drawings, studies and photos produced on site which are then worked up back in the studio. It is often the light and the way it illuminates the subject that is the spark needed to produce the work which is then executed in either watercolour or oil paint.
France and Spain are also countries where Colin enjoys working capturing the colour and life of these places, the street café’s with their umbrellas or small groups of animals as they herded across the village square of a quiet Spanish village.
Working as an Illustrator and artist since school, Colin has won several awards for his paintings including the Turner watercolour Medal at the RI and on 4 occasions the Excellence in Watercolour award at the Royal West of England Academy.
He has exhibited his work widely across the country and is represented in public and private collections.
He has been a member of the RI for 14 years and the Royal society of Marine Artists for 10 years.