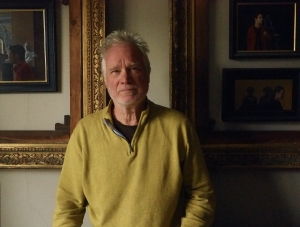 David Gleeson was born in Manchester and studied Fine Art at Aberystwyth University and Wolverhampton University. He was elected a member of the Royal Institute of Painters in Watercolours in 2022 and is also an associate member of the Society of Graphic Fine Art.

“I paint stories. Many of my paintings need time. Still moments wonderfully quiet. In my work I try to look again at the everyday. There is a bit of mystery, alchemy even, in the craft of painting. My work conjures up a world that is barely glimpsed and often overlooked. All that I do is grounded in observation.”

Exhibitions include solo and group shows in London, elsewhere in the UK, the USA and Johannesburg. I have shown at The Royal Academy, The National Portrait Gallery and the Mall Galleries.