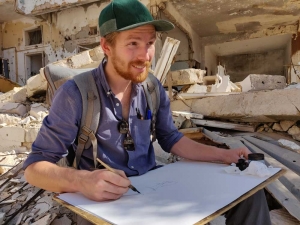 “We seem to have lost the art of the observational reporter with a sketchbook to photography, Butler’s memorable images show that a closely observed drawing is not just worth a thousand words but hundreds of photographs.” A A Gill

George Butler is an award winning artist and illustrator specialising in travel and current affairs. His drawings, done in situ are in pen, ink and watercolour.  In August 2012 George walked from Turkey across the border into Syria, where as guest of the rebel Free Syrian Army he drew the civil war damaged, small and empty town of Azaz. Over the last ten years his desire to record scenes in ink rather than with a camera has meant he has witnessed some extraordinary moments;  refugee camps in Bekaa Valley, in the oil fields in Azerbaijan, in Gaza with Oxfam, in Tajikistan, Afghanistan, Myanmar, in a neo-Nazi murder trial in Munich, on an oil rig in the north sea, down a Ghanian gold mine… the list goes on.

“The skill is to use drawing as an interview technique for an entire situation, making notes of a period of time.  It isn’t all about conflict… the drawings are of more common experiences than those on our front pages, they are of unfolding scenes, of habits, of stories, or of a single character”. He says.

His drawings have been published by The Times (London), Monocle, New York Times, the Guardian, BBC, CNN, Der Spiegel, ARD television Germany, NPR.  His work has been shown in the Imperial War Museum North and the V&A Museum which also holds some of his work in the National Archive.

WHAT OTHERS HAVE SAID

“George Butler combines the curiosity and wanderlust of David Attenborough with the delicacy of brush of Audubon, travelling afar to bring back a subtle evocation of fauna and flora and the people he meets in far-flung places.”  Geordie Greig, Editor in Chief. The Mail on Sunday.

“While photography is good in what it can reveal; drawing has that ability to have a considered approach of a different kind – simply because it is less instant and more reflective. Stories emerge from such drawings. George Butler is keeping reportage drawing alive”   John Vernon Lord

“George Butler’s extraordinarily sensitive pictures of life in all its forms tell us more about the world than most photography can.”  Robin Hanbury Tenison