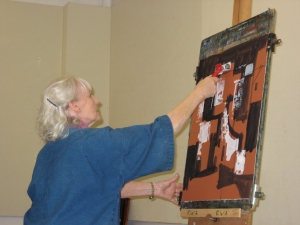 “I never travel anywhere without a sketch book, it is essential in providing a fund of ideas and information for future paintings. The idea of recording travels with a sketchbook is not new, in the 18th century it was fashionable to take the grand tour and make many topographical drawings and watercolours. Turner undertook many sketching tours, and in those days transporting equipment was fraught with difficulties. Today we have it easy and can travel far and wide.

I work in the studio from keenly observed ‘on the spot’ drawings, my paintings are often capriccios, that is, paintings inspired by more than one source of information.

My paintings portray places that particularly appeal to me visually, and also have a connection with my past. Spain and Portugal are associated with early childhood memories, I lived in Spain until the outbreak of the civil war, when my family and I escaped to Portugal, and my first holiday when we returned to Britain was to Wales, an ancient land full of atmosphere and a variety of landscape. I visit at least once a year to seek out stone cottages, slate fences, old gates, chapels, green valleys and the grandeur of the mountains. In contrast, the architecture of Spain and Portugal with its overhanging colourful pantile roofs, distinctively shaped white chimneys, stone stepped narrow streets, decorative balconies, beautiful churches and colourful boats provide yet another visual feast. ”

Studied in London at Harrow School of Art and Hornsey College of Art.

Past President of The Pastel Society

A Royal West of England Academician

Member of the Royal Institute of Painters in Watercolours

Member of the Royal Society of Marine Artists

Past Governor of the Federation of British Artists

Has received many prestigious awards, and exhibited extensively in both solo and group exhibitions in the UK, Europe and North America

Moira is the author of several books on drawing and painting

‘Sketchbook Secrets’ is her latest book, published by David & Charles in the UK and F&W Publications Cincinnati in North America.