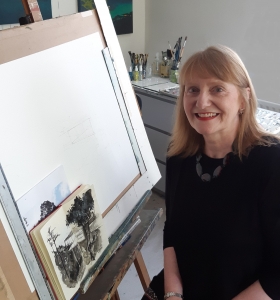 Teresa studied Fine Art at Northumbria University and at the Slade Postgraduate School, University College London. She then joined the BBC design department and subsequently worked both as a designer/art director in television and theatre and as an academic in the UK, Singapore and Australia. During this time she consistently produced paintings, drawings and installations which were widely exhibited. Painting is now her main focus working in water based media and oil.

She was awarded the Winsor and Newton prize for the group of paintings shown as a candidate at the  RI209thexhibition ( 2021) and was elected a member the same year.

Time spent as a set designer has strongly influenced my paintings both in terms of creating scenic, architectural structures and in the use of deeply contrasting lighting and intense colour. My most recent work looks at stylised houses introduced into a fictitious landscape with glimpses of the city in the distance. Creating these images has enabled me to travel to places that are impossible to access and are shaped from a multitude of references and sketches gathered over a lengthy period. In terms of process – I enjoy the ability of watercolour and gouache to be layered in such a way that colour and image slowly deepen as the paint is applied, leaving some of the original marks showing through and allowing the viewer an insight into how the image was made.

Selected exhibitions and productions include:

Royal Institute of Painters in Watercolours