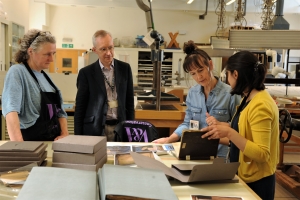 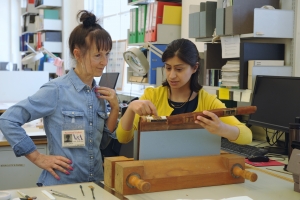 The RI archives have gone through quite a lot over the years. On October 14th 1940 St James’s church was hit by a high explosive bomb and various incendiary bombs. The church was next to the RI’s home at 195 Piccadilly and the bombs caused fire and water damage to the archives. 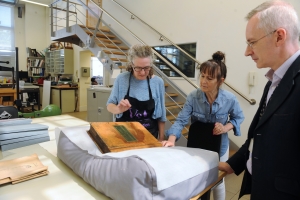 Then, in the early 1970’s, the RI and the archives moved from their home at 195 Piccadilly when the lease came to an end. This resulted in the RI joining the Federation of British Artists, based at the Mall Galleries which is their current home. The archives were stored at the Mall Galleries until the opening of the ‘Learning Centre’ when they were split up and given to Members who could find space for them at their homes. 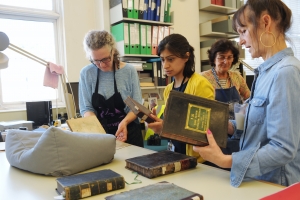 In 2018, as soon as all the archives had been retrieved, Rosa approached the Victoria & Albert Museum to see if they would take them. After speaking to their Senior Archivist, Christopher Marsden, an appointment was made to visit Rosa’s home to see what had been collected and collated. Christopher was keen to take the archives but was concerned over the condition they were in as they had now become quite mouldy, having lived in garages and sheds for many years. A follow-up visit with a colleague, Senior Conservationist, Jane Rutherstone, confirmed that a considerable amount of work was needed so that they could be preserved for future generations’ information and research. 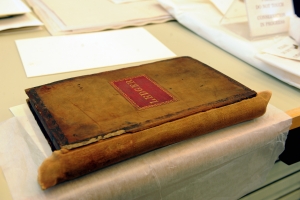 Some months later Christopher picked up eight crates of archives dating back to 1831, containing RI Council Minutes Books, Accounts Books, hundreds of letters, plans for the building of Piccadilly, photographs and copies of the catalogue’s dating back to the first exhibition in 1832 which was held at 16 Old Bond Street, London.  Much of this has been now been photographed for the RI’s records. 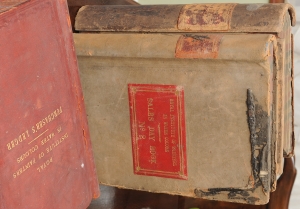 Following a discussion with the Council it was agreed that having accumulated money from fundraising exhibitions, the RI could pay the V & A for the work to begin. The work commenced in April this year and will take at least seven months to complete. 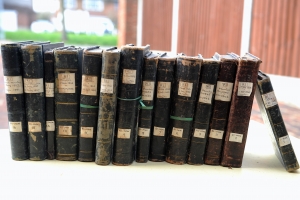 This specialised and delicate work will include cleaning to remove the mould and mildew, repairing torn documents and pages, replacing old hemp cords from the bindings of books, adding new spines and removing what appears to be molten asphalt (a specialist was asked to look at the possibility of asbestos in this tar – fortunately it wasn’t present). As the work progresses each item will have its own custom-made box.

Following this extensive work, led by Jane and her team consisting of Sarah Bashir and Rebecca Tabram, members of the public will be able to visit the museum to see or research artists from our illustrious past.

“It was such an emotional experience seeing our archives now being cared for in such a way and knowing that they will always be preserved for future generations” Rosa Sepple, May 2019