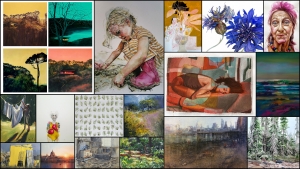 The Winsor & Newton Award: £3000 awarded to Teresa Lawler for her Group of Works

The Leathersellers’ Prize: £1,000 awarded by The Worshipful Company of Leathersellers to L C Cariou for Kew’s Princess of Wales Conservatory

The President’s Choice Award: An award of £750 to Jack Haslam for Someone Everyone

The Cass Art Prize: A prize of £200 of art supplies from Cass Art, awarded to Carol Ryder for Gold Stripe 2021

The John Purcell Paper Prize: Paper to the value of £100 awarded to Iman Howard for Inside

The Debra Manifold Memorial Award: Presented by the Linda Blackstone Gallery, an award to Delia Cardnell RI for Horizon

The Escoda Barcelona Award: A set of Escoda’s finest brushes awarded to Roger Dellar RI PS ROI for Hanging out the Washing

The Frank Herring Easel Award: An easel presented for an outstanding work in the exhibition awarded to Kimberley Walker for Out of the Blue

The Dry Red Press Award: Painting to be published as a greeting card in the Dry Red Press ‘Prize Winners’ range, awarded to Adam Deville for Eighty Two Rounds, One Knock Out

Megan Fitzoliver Brush Award: For a work that most inspires a connection with the natural world, awarded to Ann Blockley RI for Gorse

The James Fletcher-Watson RI Award: £500 for the best use of watercolour in the exhibition, awarded to Brian Smith RI for Ernie’s Beach

The Baohong Artists’ Watercolour Paper Prizes: Two prizes of £250 each, awarded to Ian Sidaway RI for The Bow River and Sarah Granville for Plot 66

The Richard Plincke RI Prize for Colour: an award of £250 for creative use of colour goes to Zi Ling RI for Dancer No.87