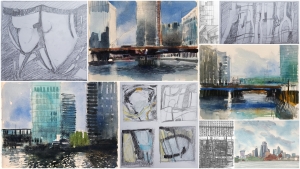 The RI London Sketchers met for the first time at Canary Wharf at 10.30am on Wednesday 28 August. Led by Jean Noble RI SWA, the sketchers were invited to study the Canary Wharf environment, to become aware of the feeling of being hemmed in by the high rise tower blocks of glass perched precariously on waterways, with all their reflective qualities. During the day they met up for an hour for lunch, with a show of and discussion about the sketches produced. Based on ideas and suggestions given sketching continued until 4pm, rounding off the day with a further show and discussion of sketches over a cup of tea! 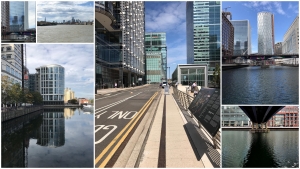