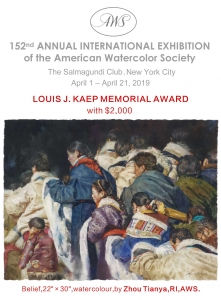 Tianya Zhou RI’s watercolour painting ‘Belief’ recently won the Louis J. Kaep Memorial Award in the American Watercolour Society‘s 152nd Annual International Exhibition.  From the images entered by over 1100 artists, paintings from 123 artists (including 32 winners) were accepted for exhibition in the Salmagundi Club, 47 Fifth Avenue, New York, NY USA. The exhibition runs from 1-21 April, 2019. ‘Belief’ is included in  a travelling show of 40 watercolours around 6 cities of USA from 2019 to 2020.
Tianya’s winning painting describes a group of Tibetans who are entering into the temple and praying. The long white scrip silk fabrics which they are holding are named Hada, which means to show respect for the Buddhist patriarch. The Tibetans live in all parts of the Qinghai-Tibet plateau, which is the highest place in the world. Many people go to the Holy Land, Lasa, to pray with one Kowtow, every one travelling from their hometown. Some people spend several months arriving in Lasa Tibet. It shows the power of the religious belief. Tibetans use their beliefs to survive and reproduce in the hardest place to live in the world. ‘Belief’ represents the spirit world of such Tibetans.
Image below: ‘Belief’, watercolour by Tianya Zhou RI 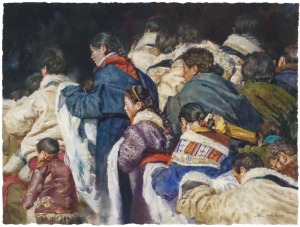