Deborah Walker RI RSMA wins an award at the RSMA

Deborah Walker RI RSMA‘s watercolour painting ‘Sunlight and Shadows’ was chosen as the winner of The Kenneth Denton Award, for a work on the theme “The Sea in all its Moods” at this year’s annual exhibition of the Royal Society of Marine Artists, currently showing at the Mall Galleries until 19 October.

“Old Harry Rocks is a name given to a chalk stack found below the cliffs at Ballard, east of Studland, marking the eastern end of the Jurassic Coast. There are two stories regarding the naming of the rocks. The name ‘Harry’ or ‘Old Harry’ were once familiar names for the devil, like the old saying, ‘to play Old Harry’ which means ’to ruin or destroy’. He is said to have taken a nap on the rocks! The other explanation links the name to the infamous pirate Harry Paye, who used to store his contraband nearby and use the rocks to lie in wait for passing ships. Either way, Old Harry Rocks were so-called as a warning to keep shipping well clear! The blinding sunlight reflecting off the chalk, modelled by softly contrasting shadows give shape and form to the cliffs.”

“…for let the form of an object be what it may, – light, shade and perspective will always make it beautiful.”
– John Constable

Image below: watercolours completing Deborah’s collection in the exhibition 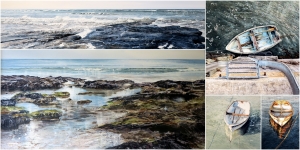