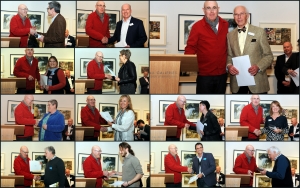 The Prize Winners were announced at the Private View on 5 April by President Rosa Sepple and presented by Humphrey Ocean RA who went on to perform the official opening.

The prize winners are as follows:

Image: All the prize winners who were able to attend. Congratulations to all!