It is with much sadness and deep regret that we have to tell you that Richard Plincke RI passed away on Saturday 8 September.

Richard Plincke was educated at Stowe, where his interest in the Art School provided a foundation for his future as an artist. He also studied experimental abstract painting at the Department of Fine Art, Southampton Institute of Education.

Formerly a partner in Plincke, Leaman and Browning, Architects, Richard followed second career as a professional artist. His approach to painting evolved over many years and his style attained a level of expression that evokes freshness of atmosphere, and sometimes the activity and excitement of the scenes of the ideas depicted. 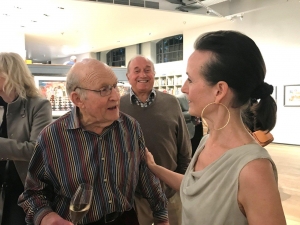 Richard was elected to the Royal Institute of Painters in Water Colours in 1984. He was previously runner-up for the Bronze Medal for two consecutive years and short listed for the Hunting Prize for the Watercolour of the year. He exhibited with the RI, the RA and the Royal Society of Marine Artists as well as in numerous galleries around England.

He carried out work in stained glass and in tapestries and appeared in two BBC television programmes, each presenting Three Artists and their work. His work has been published in nine books, particularly in the book: ‘Watercolour Innovations’ by Jackie Simmonds, published by Collins.

Richard had an exuberant enthusiasm for painting, the RI, art and for life in general. His bright and colourful paintings will be missed in our exhibitions and his delightfully vivacious character will be sorely missed by us all.  Our condolences go to Richard’s wife Rose and their extended family. 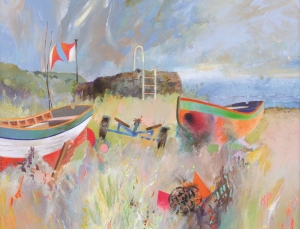